As the Net Gen is more comfortable in image-rich environments than with text1 designers, and computer scientists are using data to help us understand more about ourselves and our surroundings, mainly through visualization.

Culturegraphy2 developed by Kim Albrecht reveals represent complex relationships of over 100 years of movie references. The color gradients from blue to red that originate in the1980s denote the era of postmodern cinema, the era in which movies tend to adapt and combine references from other movies.

Netflix Similarity Map3 visualizations created by Christopher Hefele depicts the similarities between 5,000 movies as found by an algorithm used for the Netflix Prize. Movies are represented by dots with adjacent titles. 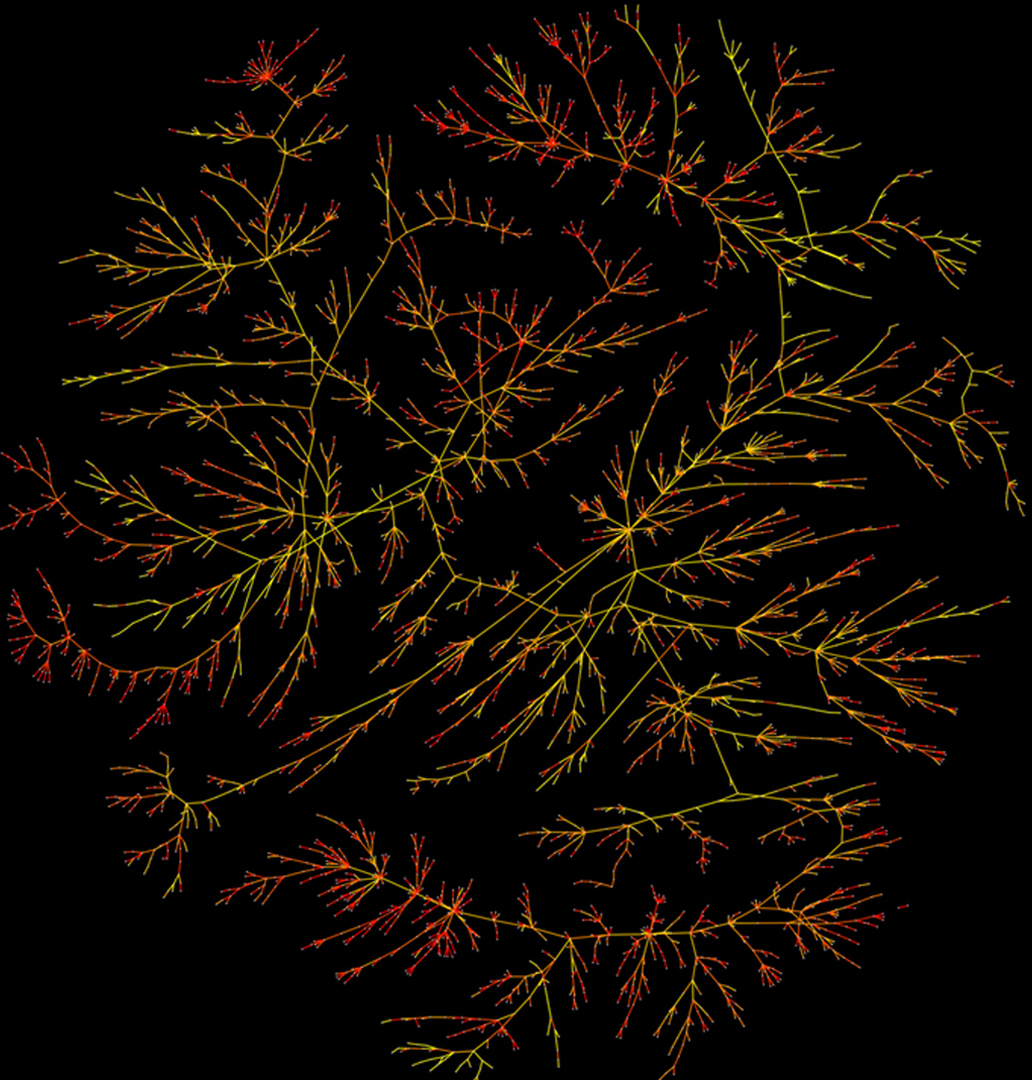 Movie Galaxy4 by Jermain Kaminski and Michael Schober provides a novel way of visualizing the narrative structure of the movie through its characters’ social network. 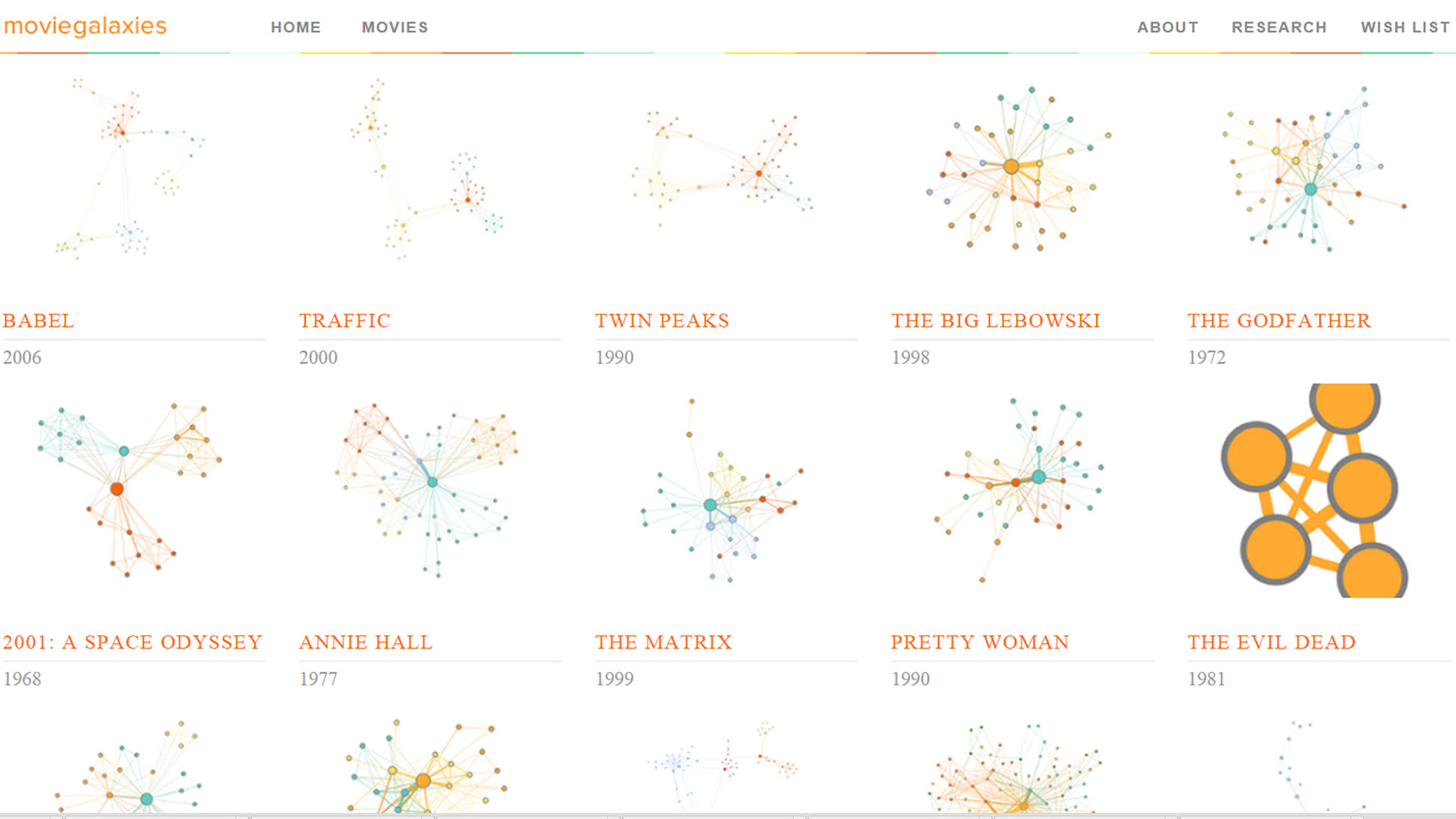 Graph Alchemist’s site Explore Movies5 is a site that lets one easily visualize networks of movies, actors, and directors. Orange circles are films, blue are people.

Patterns in Oscars movies6 by Wesley Grubbs and Nick Yahnke demonstrate the relationship between Oscar-winning Directors to Oscar-winning actors. 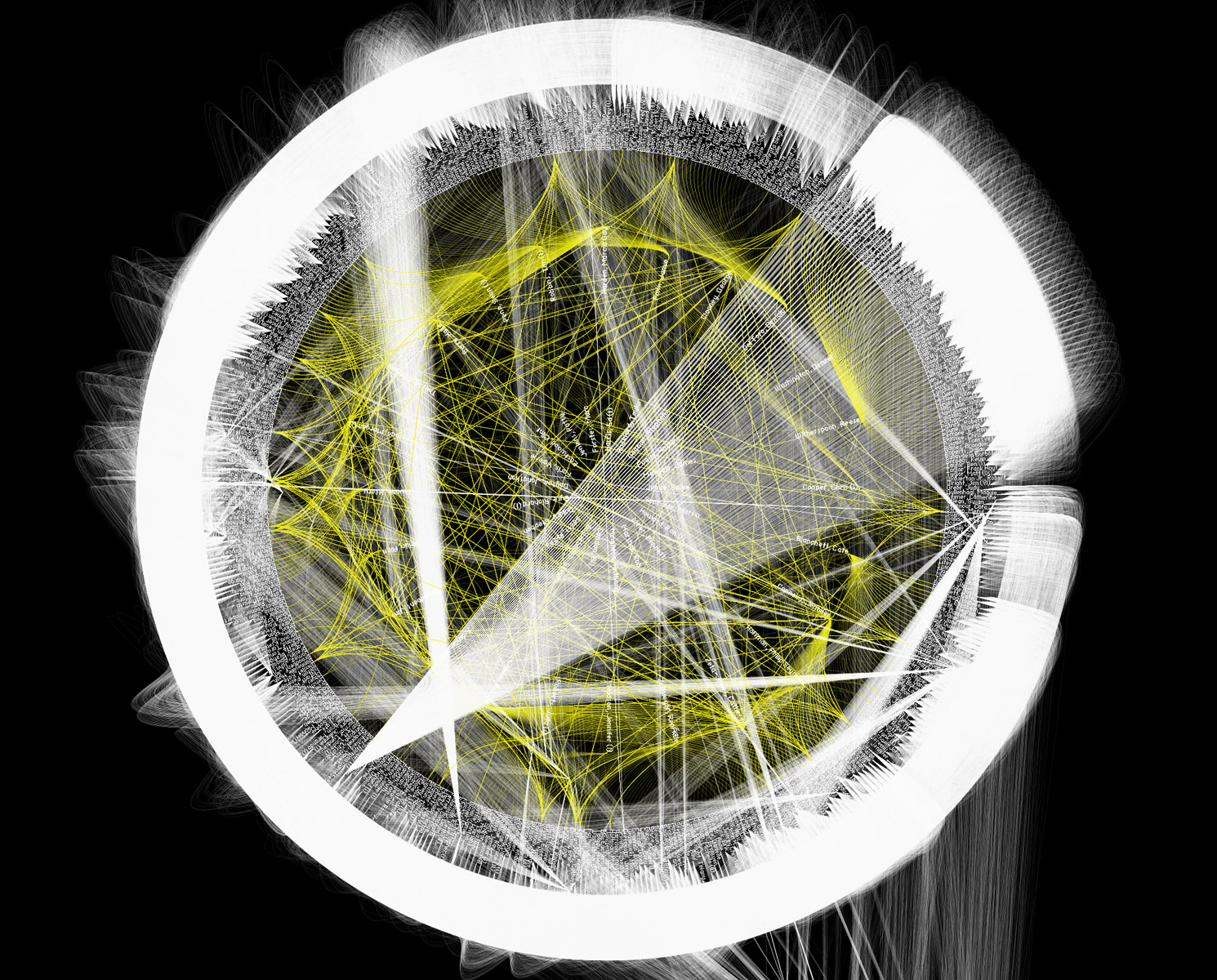 In Cinematic Particles7 by Eva Schindling subtitles and spoken dialog produce visualizations that consist mostly of black ink blobs that grow together. As the particles are constantly reset with new parameters movies that show long silent pauses between scenes gives particles more time to produce long lines and curves. By altering the replay speed of the movie, size and dynamic of the emerging drawings can be controlled. 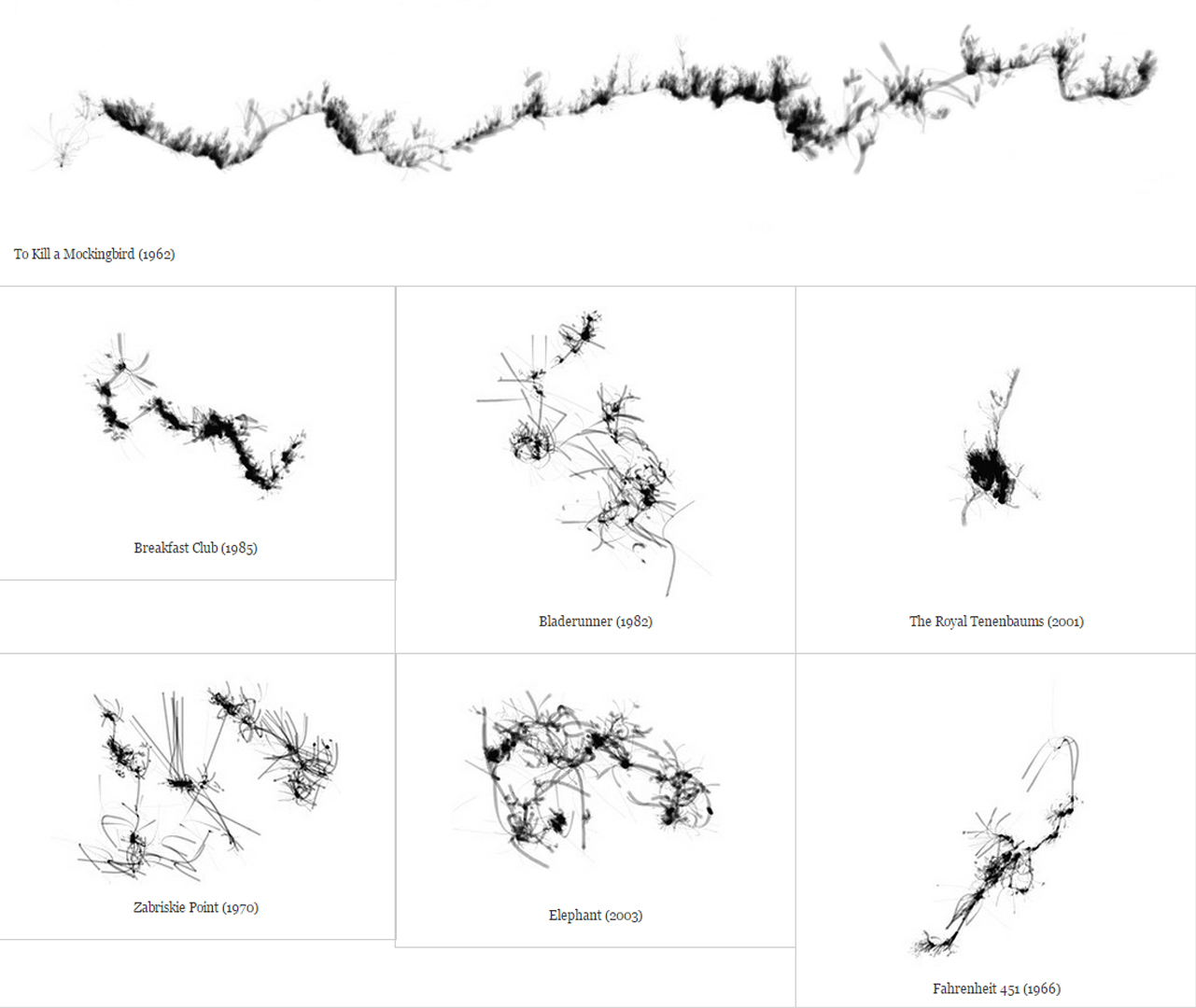 Star Wars8 by Michelle Devereaux who created a highly detailed graphic showing how almost every single element of the production of Star Wars, from its technical advances, story points and even alumni, affected the world after it. So while we all know that Star Wars was influential, now we can trace those influences step by step. 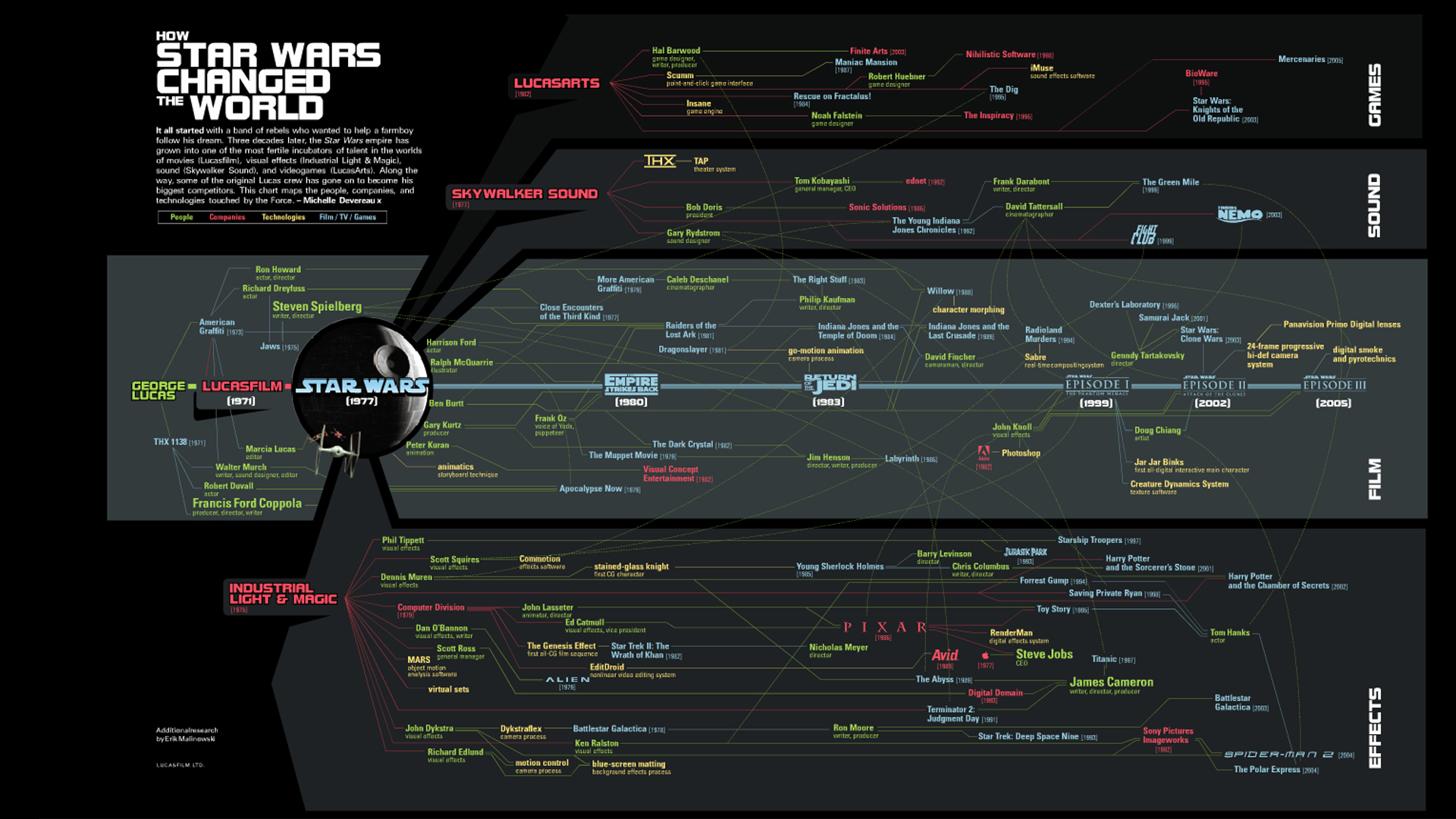 Similarly with Rocky Morphology9 by Fathom who analyzes the Rocky series in order to identify its key narrative elements. By reducing each Rocky film to its most basic components, it was possible to visualize the narrative elements that string the entire series together.